Andaman Islands... "All that we see around is nature, All that we hear is nature and all that we feel is the beautiful nature... " 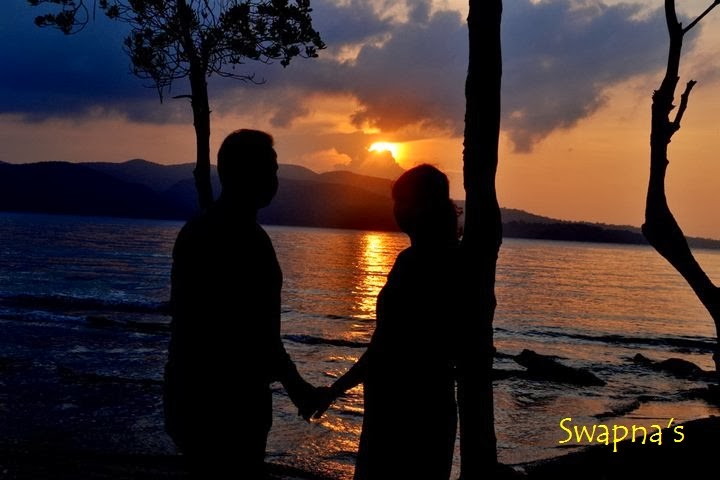 Finally, after 2 years of our marriage we planned to make a "trip" and decided the place Andaman islands...

Probably, this would be my most beautiful post as it has such beautiful photos we have captured there.... we have bought Nikon d3100 camera just before the trip...

I intend to put trip details such a way that it would help people who are planning to travel...

we haven't taken any package and went with our own plan.

We started from Pune, boarded 5:55 am Indigo flight, reached Chennai by 7:30 am. Flight connectivity to Andaman is only from Chennai.

At 9:45, boarded kingfisher flight in Chennai and reached Andaman by 12'O clock. View of Andaman islands from flight was simply wonderful...


We had a twist - Our baggage was missed by Indigo airlines. It was taken to Kolkata instead of getting it dumped in Chennai!! All our dresses & accessories were in that! We were a bit upset for that. Airlines people promised to send as soon as possible.

So, on day 1, we had to shop dresses for next day... shopping experience was not that good. We hardly selected & purchased one dress each.

Later, we visited Corbyn’s Cove Beach, closest beach to port blair. Beach is surrounded by green coconut palms. It was teemed with many people and looked like busiest beach.

Later, we went to Andaman jail for the light and sound show. One should not miss this show. It gives a complete picture of how the freedom fighters struggled there, how cruelly they were treated. The concept of the show was very nice that a old tree and center tower talk to each other reminiscing those days.

There is a cruise that takes to 3 islands closer to Andaman - Ross island, viper island and North Bay.
We started at 9:30 am. Tickets taken at Water sports complex - 400rs/person, that includes lunch too.

On the boat journey to these islands, we would see the main port and navy ships of Port Blair. This part of the journey is to be completed before evening as boats are not allowed after 5 PM.


Ross Island - It was once an administrative headquarter for the Britishers, before an earthquake rocked the Island in 1941. we would see old buildings built by British. This island makes you nostalgic and takes you back in time when this was an administrative settlement for the Britishers. The Indian Navy has rebuilt some of the old buildings like the bakery and the local stores, from where souvenirs are available. Sea there looked greenish. There were coconut trees, deers & ducks.

Viper island - there was a small jail where the British used to imprison convicts and political prisoners. We learnt that Viper Island witnessed the untold sufferings the freedom fighters had to undergo.

Northbay: reached by 2:15 pm. It is a rocky beach with white sand, a place to relax. Every one enjoyed drowning in the sea between rocks.  Locker facility was there so that we can put our belongings and just have pleasure in water. we were there till 4:15 pm and returned back to Andaman.

We finally got our baggage from airport :)  We planned to go to Havelock island... this is the most attractive place that one must visit as part of Andaman trip. We booked Makruzz and boarded at 8:45 am. Deluxe seat costs 750/person. Reached island by 10:30 am. Journey on cruise was very nice...


We booked cottage (bamboo hut) maintained by Joseph, Cottage was like small huts just on the sea shore. We got fresh, took bike on rent from Rishi and started to Radhanager beach. On the way, we had lunch at Royal restaurant. There were lots of foreigners in that island and it looked like they had come for long vacation...

Radha Nagar beach - Fine white sand, blue waters and a lot of peace and serenity are the hallmark of this. We took some cool pics, spent some quality time and walked along the beach. There were many coconut trees and most of the people are being fed by coconut water.


We got up early at 6:30 am, had break fast and we rested on the sea shore listening to nice music... At 8:30 am, we started to elephant beach on speed boat. We just took camera, nothing else. Beach is very unique with beautiful corals and giant fallen trees. we got to see corals through glass bottom boat. It is the best place for snorkeling and we experienced it. I was a bit scared in the starting, later I become comfortable and it was a beautiful experience.


We could hardly get a small cake in Havelock island and finished bday rituals :)


Later, we started to kalapathar (black rocks)beach.  Drive towards the beach was very much like a marine drive. There were hardly any people around. There was no tourist infrastructure available and nature was left as is. We took nice snaps and returned back soon. Though there are no symptoms of danger, I felt little bit insecure as there was no one around and we were long away from center of island.

At 4 pm, we started back to Andaman.

This day, we planned to roam with in port blair.

We went to andaman jail once again to see the jail in detail (not for the show).
The jail was constructed as a 3 storeyed edifice with 7 wings, Each wing stretching from Central tower like the ray of a star fish or the spokes of a wheel. We had seen gallows, some of the cells. There were monuments showing how prisoners were tortured there.


Later, we went to Sagarika Government Emporium which had a wide range of woodcarvings, cane and bamboo furniture, shell accessories for display and sale. We bought some accessories and nicknacks for near and dear.

We had some time left for the day and I had been nagging that we couldn't cover sunrise/sunset. So, Balu made a plan to go to chidiya tapu (Andaman's Best Sunset Beach). Chidiya Tapu, also known as "Sunset Point" and "Bird Island," is one of the best places to see the sunset in Port Blair (25 kms South of Port Blair). We didn't have time to book car, we just boarded an auto to reach there. The road traverses through dense jungle/rainforest that opens up along the coastline in a few places. Beach is quiet and peaceful. We could take some beautiful pics with dark effect (sun being opposite to camera). While  it is best sunset spot accessible from Port Blair, the horizon is obstructed by the hills of Rutland Island across the bay.  As a result, the best colors come out about 30 to 45 minutes after the sun dips below the hilly horizon. It was our last but not least beach we visited in Andaman. Our last minute plan to chidiya tapu worked out well and resulted in best experience.

The day to return back from Andaman. We were tanned and tired enough by then :).

During this trip, I used to think about tsumani (of year 2004) occasionally... how such a beautiful nature can turn against us as an evil...

We roamed around port blair jetty before going to airport. In Chennai, we met our friend Ravi kishore and we returned to Pune by night.

Whole trip costed us around 60k.

Summing up, the trip was wonderful and experience of white sand, pristine beaches, snorkeling, speed boating  was just awesome. Spending our best occasions - marriage day, my birthday closer to beautiful nature is unforgettable.

Heard that Orkut is going to be shutdown... I really had great fun with Orkut... It witnessed the best times of my life :):). The best thing in Orkut that is not in facebook is "Testimonials".

Can any one miss testimonial words by friends/relatives!! I am securing those here:

Posted by Swapna at 7:10 PM No comments: